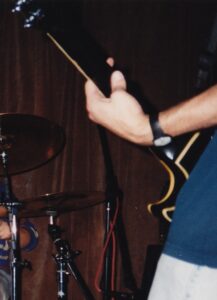 My name is Brian. I played guitar for the band Flood back in the mid-1990s. We played around the Nitro/Charleston music scene, with a few shows played in Huntington.

I collected a lot of memorabilia while I was in Flood, and I wanted to make it available to others who were part of the scene in those days.

I now live in the midwest, 500 miles away from the place where all these memories were made. These days I’m making new memories; I’ve been married for over 25 years now and we have two wonderful kids. I program computers for a living now. I also write novels on the side. I play guitar every day since picking it back up strong again in 2017.

The stage is calling to me once again…

But enough about me. Have a look around and re-experience the Nitro days as they were, captured by the folks who were there.